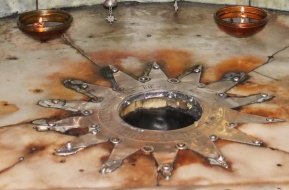 The city of Bethlehem in the land of Israel is as well known and revered among Christians as the city of Jerusalem. The name Bethlehem in Hebrew is ‘Bet Lehem’ meaning ‘House of Bread’ and in Arabic, ‘Bayt Lahm’ meaning ‘House of Meat’. It is renowned as the city of David, the warrior king of ancient Israel, the birthplace of Jesus Christ and the scene of important events in Biblical history.

Today it is a great attraction for pilgrims and tourists from all over the world. Situated on a limestone ridge in the Judaean hills some 5 miles (8 kilometres) south of Jerusalem, it has a mainly Arab population that is roughly half Christian and half Moslem. They live fairly harmoniously together, despite the ongoing animosity between the Israelis and the Palestinians.

Evidence that the city is very ancient comes from cuneiform clay tablets found at El-Armana in Egypt in 1887 and dated to the 14th Century BC. These tablets are diplomatic letters written by Canaanite kings to the Egyptian Pharaoh and Bethlehem is mentioned amongst this correspondence as belonging to the district of ‘Urusalim’ (Jerusalem). So we have support from outside the Bible that Bethlehem was a thriving city some 3,500 years ago.

When travelling from Jerusalem to Bethlehem the route passes the venerated shrine of Rachel’s Tomb, which is near the village of Beth Jala and then moving on, the road circles the hill on which Bethlehem stands, taking you into the center of the town. There is very little left of the city from the earliest times, apart from the fields where farmers still graze their flocks as David and later the shepherds did in the time of Christ.

When we go back in the Biblical records, we find in the book bearing her name, the romantic story of Ruth the Moabitess and her connections with the city of Bethlehem. Because of famine in Israel, a family from Bethlehem, Elimelech and his wife Naomi, with their two sons Mahlon and Chilion, had emigrated eastwards across the river Jordan to the land of Moab. The family it seems, integrated well into Moabite society with the two sons marrying Moabite women. But tragedy struck; first the father, Elimelech died and then after about ten years the two sons also died, leaving Naomi with her Moabite daughters-in-law, Orpah and Ruth without support.

When the grieving Naomi learnt that the famine had ended in her homeland she decided to return to Bethlehem to her family and relatives, where as a widow, under the principles of God’s law, she would be cared for. Despite Naomi’s advice to Orpah and Ruth to stay in Moab and possibly marry again, Ruth pleaded to be allowed to accompany Naomi back to Bethlehem [Ruth 1.16-18]. In this family relationship, Ruth had already decided to put her trust in the God of Israel and she chose to stay close to Naomi.

A study of this Book of Ruth tells us that when Naomi and Ruth arrived in Bethlehem they were befriended by Boaz, a relative of Naomi, a wealthy man who practiced the principles of God’s laws. One important outcome of this man’s friendship and kindness was that he married Ruth and the happy result of this union was the birth of a son called Obed, who became the grandfather of King David [Matthew 1.5].

From this family line in Bethlehem, the boy David grew up in this area, looking after his father’s sheep and we see the development of this youth into ‘the man after God’s own heart’. It was during the long days and nights in these hills and fields around Bethlehem that this young lad’s character developed and where the thoughts and the feelings expressed in those Psalms of David grew and matured in his mind. It was to Bethlehem that Samuel came later, at God’s command, to select this little known son of Jesse and then to anoint him as Israel’s future king.

When David eventually became king, the Philistines were in control of Bethlehem and he expressed a longing to be able to drink from the well at the gate of the city. On hearing this, three of his mighty warriors risked their lives to bring water from the city for their new king [1 Chronicles 11.16-19]. It was not David’s intention that these faithful servants should put their lives in jeopardy in this way, but it showed the lengths to which these men were prepared to go in service to David. It was a foretaste of the allegiance that they had for him as they went forward into the battles that followed to establish the kingdom of Israel.

David we note did not attempt to make Bethlehem his capital city; it had been revealed to him that that God had chosen Jerusalem as the favored city; ‘For the LORD has chosen Zion; He has desired it for his habitation’ [Psalm 132.13 NKJV]. But great things were spoken about Bethlehem that pointed forward to the birth of Jesus Christ. Some 350 years later the prophet Micah had this to say: ‘But you, Bethlehem Ephrathah, though you are little among the thousands of Judah, yet out of you shall come forth to me the one to be ruler in Israel’ [Micah 5.2 NKJV]. The message from this inspired prophet was that God had chosen Bethlehem to be the place where the Savior of the world, Jesus Christ, would be born.

The Bible student can see the hand of God at work in the history of this favored city. Even though Mary the Jewish girl chosen to bring the Messiah into the world, had moved away from Bethlehem to Nazareth, the finger of God can be seen operating to fulfil Micah’s prophetic words.

It was a Roman Emperor who was moved to make it happen; ‘And it came to pass in those days that a decree went out from Caesar Augustus that all the world should be registered’ [Luke 2.1 NKJV]. This need for a census meant that both Mary and Joseph had to return to Bethlehem, the city of their birth to register. It was there, because there was no room in the inn, that Jesus was born in a stable, which was probably a cave beside the inn.

The birth of the Son of God in Bethlehem was noted by wise men (magi) from the east who came to Jerusalem asking ‘Where is he who has been born King of the Jews? For we have seen his star in the East and have come to worship him ’[Matthew 2.2 NKJV].

Herod the Great was the ruler of Judaea appointed by Rome at this time and he saw in this event of the birth of Jesus, a rival to his throne. When his enquiries placed the birth of Jesus in Bethlehem he sent his soldiers to ‘put to death all the male children who were in Bethlehem and in all its districts, from two years old and under’ [Matthew 2.16 NKJV].

The murderous intent of King Herod towards Jesus was thwarted by the fact that Joseph was warned to leave Bethlehem and travel to Egypt, where the family stayed until Herod died. This slaughter in Bethlehem has gone down in history as the ‘Massacre of the Innocents’, but it was also the fulfilment of a prophecy through Jeremiah: ‘A voice was heard in Ramah, lamentation, weeping, and great mourning, Rachel weeping for her children, refusing to be comforted, because they were no more’ [Matthew 2.18 NKJV].

The Church of the Nativity in Bethlehem can be visited today and is supposed to cover the place where Christ was born. A silver star fixed to the floor marks the spot, but some doubt its authenticity. It is known that the Emperor Constantine built a church there in the fourth century AD.

It is also claimed that Constantine knew of the place because earlier the Emperor Hadrian (AD 76-138) had set about destroying the buildings venerated by Christians and that over the stable at Bethlehem he replaced a church there with a temple to Adonis. Constantine pulled down this pagan building and replaced it with a church. How much of the building remains after the centuries of battles that have been fought over the land of Israel, we do not know.

We do know that the church on the site today is shared by several sects of ‘Christians’ and that demonstrates vividly to us the divided state of Christianity. Those who have managed to visit the place can be upset by the atmosphere inside the church, which one writer has described as ‘more like an Oriental bazaar than a holy site.’

But it was outside the city in those peaceful fields surrounding Bethlehem, that the angels appeared to those shepherds ‘praising God and saying: Glory to God in the highest, and on earth peace, good will towards men’ [Luke 2.13,14 NKJV]. It is there that we can contemplate the great events that have taken place in this favored Biblical city.

History shows us that ‘peace’ and ‘good will’ have not been at the forefront of the thinking and behavior of mankind since the birth of Jesus. But we can be comforted by the fact that Jesus is coming again to make those angelic words a reality on this earth. The message given to Mary the humble girl from Bethlehem was very clear:

‘…you will…bring forth a Son, and shall call his name JESUS. He will be great, and will be called the Son of the Highest; and the Lord God will give him the throne of his father David. And he will reign over the house of Jacob for ever, and of his kingdom there will be no end’ [Luke 1.31-33 NKJV].

Therefore we can look forward with confidence to the day when that holy child born in the city of Bethlehem will return to this earth in all his glory. Then he will sit on the throne of his ancestor king David, over the kingdom of Israel which will then become the nucleus of the kingdom of God on earth.

Your request was submitted successfully. Thank you!
Our representative will contact you shortly